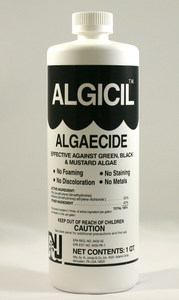 For the most part, when we hear that someone has a green pool, we immediately think of algae. And for the most part we’d be right, but as I learned many years ago the two are not necessarily synonymous. Algae which is an airborne plant has many strains which can occur, the most common being green, black, mustard and even pink (technically not an algae, but a bacteria). So for years as pool owners you have been trained that when your pool turns green that you should shock it or hit it with algaecide. But what if these things do nothing to effect the color of your pool? Even still, what if shocking your pool with chlorine makes it worse OR it turns green immediately after you shock the pool??? What does that mean? It could be algae or it could be copper. Well, this is when it’s helpful to consult a trained pool professional who has access to specialized testing chemicals and equipment.

Now generally there is no test for algae that can be done at a pool store, however a seasoned water testing professional will look for certain signs and ask you a series of questions to help determine what is the source of the pool’s illness. For one, if someone tells me that there pool is green, I like to perform a chlorine test to see what the level of free chlorine is in the pool. Usually in a pool with live active algae, there is either no or very little free chlorine (we’ll talk about the difference in free chlorine vs. total and combined chlorine in another blog) present in the water. This is pretty much the case for the fact that chlorine will be used or spent fighting off the algae. It doesn’t necessarily kill off all the algae, but it gets used up in the battle. Occasionally someone can have both live algae in the pool and yet still register a good or even strong amount of chlorine. In this case the algae has become chlorine-resistant, like germs can become resistant to antibiotics, and is often caused from not shocking the pool enough on a regular basis. And so algae gets used to certain amounts of chlorine over time and becomes harder to kill. As the saying goes. “that which does not kill us makes us stronger” and is true with algae too! 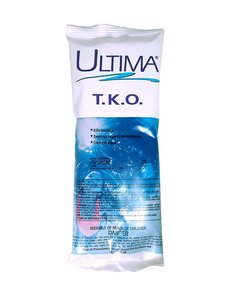 So, assuming someone has a green pool and no free chlorine, the most logical thought is that it is algae and it has depleted the free chlorine levels and now is running rampant in the pool. At this point I will often ask if anyone has been in the pool recently and noticed any slimy spots on the floor, walls or equipment. If they have noticed this (and the chlorine level is low), generally you’re safe to assume it is algae, and want to take a course of action to get rid of it such as shocking and/or adding algaecide. Usually a green pool for the reason of algae in the pool happens gradually over time – it starts somewhat green and gets greener WITHOUT the addition of any chemicals.

However, if someone’s pool is green and it occurred in a matter of minutes or immediately after adding larger amounts of chlorine (i.e. a shock dosage) then we have something different going on here. In this case the problem is high levels of copper and nothing to do with algae. Copper, which can be introduced to your pool in a variety of ways such as through copper pipes in the city or town water supply or from your own home, is generally not something you want in your pool’s water. Strangely enough although copper will prevent algae from occurring, we at E-Z Test Pool Supplies recommend copper concentration to be at 0 or no more than .3 ppm (parts per million). In a side note, copper comes in 2 varieties, chelated and non-chelated, and it is the non-chelated copper that is a bigger problem. In cases of high copper concentration pool owners will notice that they shock the pool with chlorine, liquid or granular, and see an immediate turn to a green color. This is a direct chemical reaction between chlorine in a large quantity and copper present in the water. Just like a high school chemistry class lab, only pool-sized, presto…you have a science experiment in your backyard! Not so much fun though!

In this latter case the pool often will have normal or even high levels of free chlorine and no slimy spots in the pool. This is where the specialized equipment comes in. If your pool store is onto this trend or you suspect this is going on, ask your water test technician to test for the presence of copper. If you have it in high enough amounts, than that is your offending culprit, not algae. In fact all the chlorine shock and algaecide won’t do anything, except waste your hard earned money.

So in this circumstance what you need is a metal remover – I suggest  N. Jonas Chemical Company’s KEETROL PLUS. Keetrol Plus is what we in the business call a sequestering agent. No this has nothing to do with Congress! Essentially, what a sequestering agent does is take all metallic substances such as copper, iron and manganese and binds them chemically with the product so that the filter can remove them from the pool. Be sure to follow the instructions on the bottle and run your filter a little extra to help remove these metals. This is where a DE filter is worth its weight in gold in that it can remove these metals more easily than other filters can.

So next time your pool is green and algaecide and shock have done nothing and you’re scratching your head, consider that it may not be algae at all. I hope this helps.