Your Dolphin / Maytronics robotic pool cleaner is a reliable work horse. It has been cleaning your pool effectively for years but maybe you are starting to notice that it isn’t moving quite as good as it once was and not completing the cleaning job as good as it once did. The issue could very well be worn out  guide wheels and pulleys causing the robot’s track to slip and work at less than full power. These parts do in fact need to be replaced every once in a while. 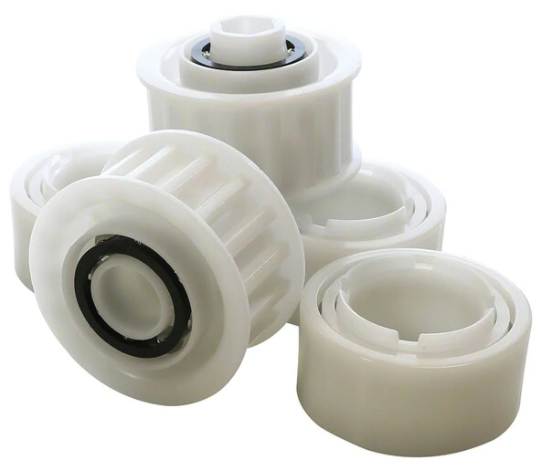 Inside of the drive pulley is something called a center pin. This center pin spins when the robot’s motor is running. The pulley, along with help from the guide wheels, operate the robot’s tracks which in turn, make it move. Changing out the gears and pulleys involves unscrewing and removing both side plates to gain access to the gears, wheels, tracks, and pulley. The pulley is located center and most of the time toward the top. Located on each side of that are guide wheels. Both  the wheels and pulleys are attached firmly but can be successfully removed after applying some pressure. The guide wheels snap in and out of place using the built-in notches and can be changed out depending on their wear.

After a change out of some key parts, your robot will be back doing what it does best and that’s keeping your swimming pool spotless. We are a Maytronics Certified Genuine Parts dealer. Genuine parts are what you always want to go with to keep your pool cleaner in its best condition.

We have an on-staff robotic technician as well as a team of professionals who have many years of robotic pool cleaner experience. Our staff would be happy to help advise and answer any questions that you may have.