So, what are the differences between the Pentair IntelliValve valve actuator and other actuators on the market today?

Well, the first question you may have is, “what is a valve actuator?” and you would not be alone in asking this question.

The quick answer to this is that an actuator controls one or more of the diverter valves in your pool's water flow system. Using an actuator allows you to turn on and regulate your pool or spa’s water features with either a push of a button, or through using a mobile app. Actuators are hard wired into your system’s controls for ease of use and are usually mounted on top of, or close to, your pool's diverter valve(s).

The best way to illustrate this concept is by taking a deeper look at the latest Pentair motorized valve actuator called  the IntelliValve that provides complete control over two port and three port diverter valve settings. Let’s say you have both a pool with unique water features and a spillover spa to go with it. If you wanted to divert water and enjoy the features of both then this is where using a valve actuator comes in. If you want to partially leave something in “Position A” but instead of having to go all of the way to “Position B” maybe you want to stop somewhere in the middle like let’s say for both the previously mentioned trickle effect of a spa and water feature in your pool, well with this latest technology, you can most certainly do this with ease.

The standard Pentair actuators and others like it on the market are still super useful and function amazingly but they involve having settings that are predetermined and cannot be adjusted on the fly. The big take away is that if you wanted to make changes to these settings you have to manually open up the actuator to adjust the cams. What is a cam? A cam is the actual mechanism that works to divert and hold back a percentage of water flow through any given valve.

The Pentair IntelliValve has 13 LED light positions that allow you to adjust the flow in 3.75-degree increments. So, to the average pool owner this allows more flexibility in setting water flow and eliminates having to open the equipment to change the settings. Cam changes now occur on the front face of the actuator and then you can adjust/switch through the automation app.

With the Pentair IntelliCenter, water flow is now something that you can control via your cell phone or tabelt from anywhere in the world through Pentair’s automation application. Through the app you can also include these actuator settings into what are called “group settings” that are a certain set of automation parameters which are remembered and can be quickly switched to. An example could be with the lighting, the water features, and possibly the heat pump for a night time party. Automation provides convenient controls to set the desired environment on-demand.

On the front panel of the IntelliValve you have two arrows. One sends the actuator one way and the other arrow sends the actuator the other way. All you have to do to operate this is hold the button down and when you reach the desired flow you just let go. The final thing you have to do is hit “Save”. That is really all there is to setting the valve. If you ever forget how to operate the IntelliValve actuator, the directions are printed right on the top of it. The IntelliValve design is minimalist and sleek and was designed this way on purpose to fit conveniently within any equipment pad. It operates on 24 volts and works with most automation systems.

The difference in price between the IntelliValve and other Pentair actuators is less than 20 dollars. The actuator is both a 2-way and 3-way, fits any brand’s valve and can be used on 1.5-inch, 2-inch, 2.5 inch, and 3-inch valve sizes. The actuator is available at an economical price, does not have to be strictly used with the full automation platform, and utilizing it provides the ability to never have to manually adjust the cams again. The Pentair IntelliValve truly is the most revolutionary valve actuator that’s ever been created.

The IntelliValve is available for purchase by clicking the button or image below. We also have both John and Roy from Pentair who were able to join us and discuss the IntelliValve more in depth in the included video. If you have any questions on this or any of our other products, we would be happy to help.  Contact Us Here. 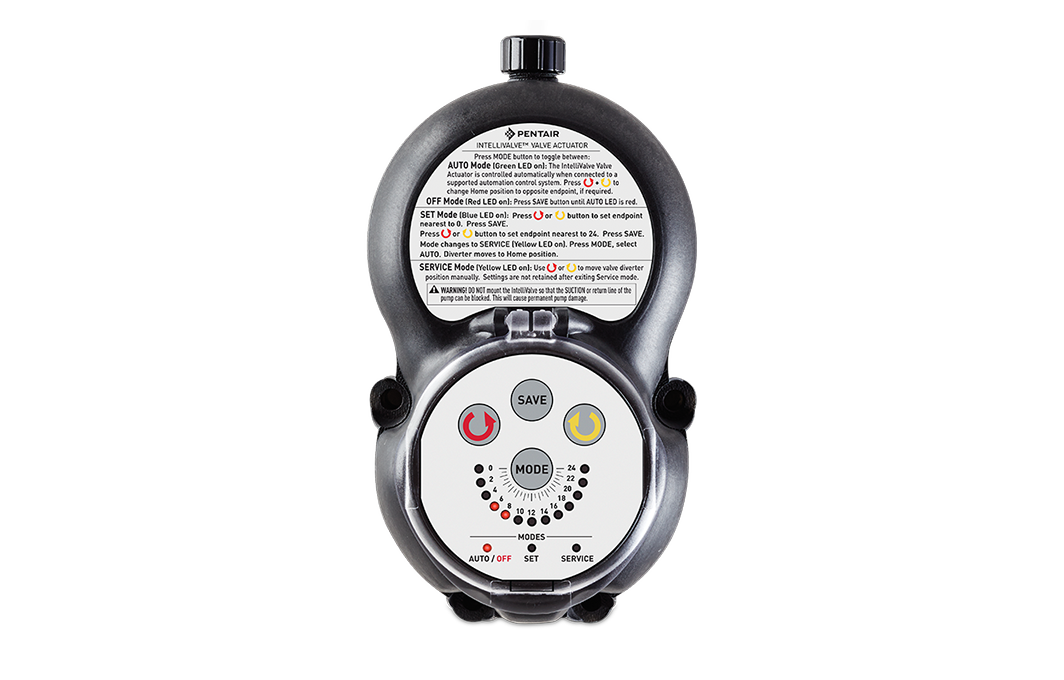